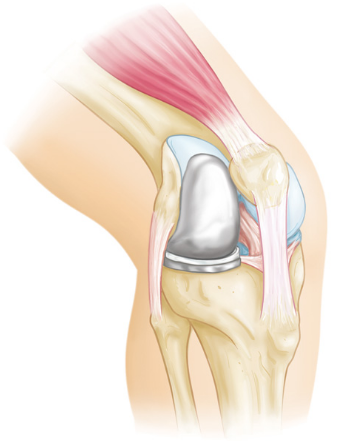 Partial knee replacements are designed to replace only the abnormal part of the knee joint instead of the entire joint. These are suitable where the degenerative changes are localised to one compartment of the knee.

The knee joint is a complex joint formed between the lower end of thigh bone (femur) and the top end of the leg bone (tibia). The lower end of femur is like an hourglass in cross section forming two rounded condyles. These articulate with the tibia to form the medial (inner) and the lateral (outer) compartment of the knee.

In addition, the knee cap (patella) articulates with the lower of femur to form the patellofemoral joint. This makes a total of three parts in the knee joint –

Note the loss of space (arrow) between the two bones on the X ray on the left. The X ray on the right shows replacements of part of femur and tibia. The space between the metal parts (dense white) is the plastic which forms the bearing surface of the knee. This is an example of the Oxford design

Replacements of the lateral part of the knee are relatively rare.

3.  Patellofemoral joint  (Front of the knee)

X ray on the left is a side view showing loss of space between the patella (kneecap) and the femur (thigh bone). This has been treated with a replacement comprising a metal component fixed to the femur and a plastic (polyethylene) component cemented to the back of the knee cap.

In the carefully selected patient with isolated arthritis of the front of the knee, this operation gives excellent pain relief and function.

Each of these joints can be resurfaced individually, as long as the other two parts of the knee joint are relatively intact and not causing any clinical symptoms.

"The operation has made it much easier to do normal walking and going up and down stairs. I am no longer limited by how my knee feels "- Cheryl Lloyd, Cardiff

ARTHRITIS OF THE KNEE

2. The incision for surgery is generally smaller, and involves lesser trauma to the tissues compared to total knee replacements. The recovery is faster and there is less postoperative discomfort.

1. Progression of arthritis in the remaining part of the knee joint can cause recurrence of pain, and this requires conversion to a total knee replacement.

3. Careful selection of patients is critical to achieve the best outcome and minimise suboptimal results.

If you have further questions, please contact us about your query, and I will be delighted to respond to any comments, questions or concerns.